Jill Stein, candidate for the Green Party nomination for President of the United States, participated in a guerrilla gardening exercise through the fence of the Community Garden after she spoke at the invite of Berkeley Post Office Defenders (BPOD) and the local Green Party on June 3rd, 2016 on the steps of the downtown Berkeley Post Office.

In late April Postal officials had installed a metal fence, blocking access to the BPOD and First They Came for the Homeless initiated Community Garden at the Post Office. Two weeks earlier they had evicted the FTCftH protest occupation from the Allston/Miliva corner, removing the bike rack. That area was also fenced off.

About one hundred people came at 4:30 PM to hear Dr. Stein speak on the state of the economy, the state of our politics, the plight of the Post Office and what she would do about it all (good stuff!) if elected.

Mike Wilson of BPOD spoke about the importance of the institution of the Post Office in opposition to neo-liberalism and other forces of privatization. 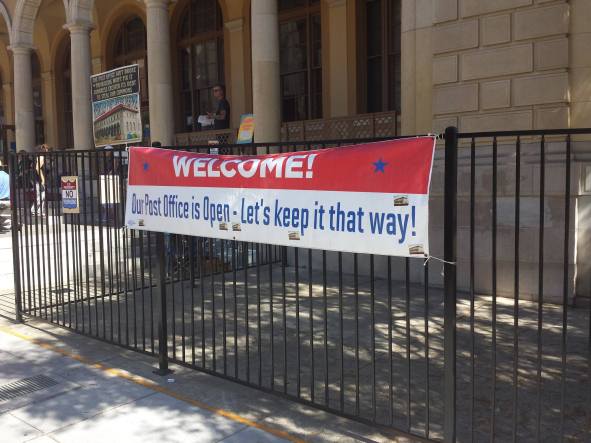 Shirley Taylor, from the American Postal Workers Union, spoke of the union’s support in the fight to keep the Berkeley Post Office open, and the need for the Postal Service to continue to exist with augmented services, like Postal Banking, for us all.

Jesse Arreguin, Berkeley City Councilor for the district the Post Office is located in, and candidate for Mayor, spoke of Berkeley’s resolve to keep the Post Office open, and of the Postal Service’s latest attempt to threaten Berkeley by demanding, under threat of lawsuit, that it rescind a zoning ordinance passed two years ago which affects the uses to which the 2000 Allston Way property could be put to should it be sold. He noted that the City Council was still united in its opposition to these tactics and any attempt to sell the building.

Mike Zint, of FTCftH, who had maintained the protest occupation for seventeen months before being evicted, spoke of the gross injustice and symbolic affront that putting up the fence around our Commons has created.

Then the guerrilla gardening started, as a few people found their way inside, and others watered the remnants of what had been a flourishing garden through the fence. Seeds balls were tossed over or through the fence, one by the candidate, with thoughts of germination in mind.

Pictures thanks to First They Came for the Homeless. The event was bottom-lined by Carol Wolfley (above, middle).