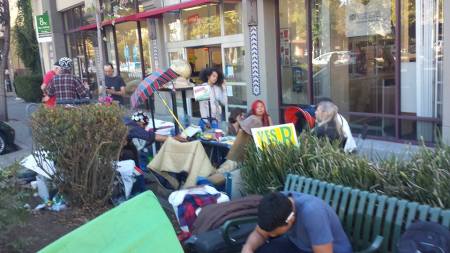 The sidewalk outside of Staples in Berkeley has been Occupied now for over 100 days. As First They Came For the Homeless, the SF Occupier group that organized the effort posted recently on their Facebook.

Over 100 days and counting. The siege of staples in Berkeley continues. Still no valid complaints about our occupation. We number between 15 and 20 nightly split between 2 groups. The main info table is in the front and the tent city is in the back.

The group would love to have more community support – 100 days is a long time to be sitting in one place! Comraderie, food and soft drink are most welcome! Come by and visit them pretty much any reasonable hour at Shattuck and Durant in downtown Berkeley, just two or three blocks from the Downtown Berkeley BART.

The Staples protest and occupation is in support of the nationwide Staples boycott that began in Berkeley some 10 months ago when Berkeley Post Office Defenders first rallied in front of Staples and was adopted by the American Postal Workers Union, spreading it across the country with their Stop Staples campaign. It is there jobs at stake should the Post Office continue to install miniature Post Offices staffed by low-wage, non-union Staples employees within those emporiums.