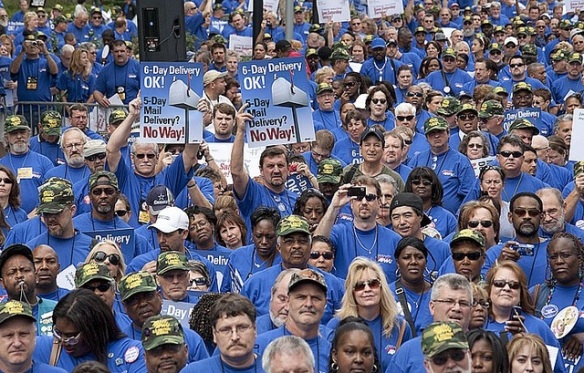 The U.S. Postal Service is under unprecedented attack. A congressionally manufactured financial crisis drains the USPS of vital resources. Six-day delivery is under constant threat of elimination. The reduction of service standards and the elimination of half of the nation’s mail processing centers has slowed service and wiped out tens of thousands of good jobs. Post offices in cities and small towns are being sold or closed or having their hours cut back. Corporate privatizers seek to gain control over larger segments of postal operations- and to get their hands on the Postal Service’s $65 billion of annual revenue. The Postmaster General’s policies of subcontracting and degrading service are fueling the privatization drive.
The four postal unions stand together to end the attack. We stand for a public Postal Service, enhancement and expansion of service, and protection of good union jobs in our communities. We stand with the people of our country in defense of their right to a universal postal service operated in the public interest.

We commit to work together to:

• Oppose the subcontracting of work and privatization of services.

• Expand postal services to include basic banking, notary, check-cashing and other services.

• Organize joint actions and speak in a united voice.

• Unite with other labor unions in defense of the rights of postal workers and all workers.

• Encourage joint efforts of our union members at the local level.

• Support maximum cooperation in the next round of contract negotiations.

• Build an alliance with the American people in defense of the public postal service.

“We have agreed to work together to defend a beloved national treasure. Our efforts will benefit all postal employees and the people of this country who expect and deserve a vibrant, public Postal Service for generations to come.”

“The United States Postal Service shall be operated as a basic and fundamental service provided to the people by the Government of the United States, authorized by the Constitution, created by Act of Congress, and supported by the people. The Postal Service shall have as its basic function the obligation to provide postal services to bind the Nation together …. It shall provide prompt, reliable, and efficient services to patrons in all areas and shall render postal services to all communities.”